In 1958, Britain's Royal Mail Lines decided to assign their flagship ocean liner Andes to full-time cruising, and to replace the last three of their pre-war "Highland" class passenger cargo liners with three large, modern newbuilds. Amazon, Aragon and Arlanza were the last British ships to carry third class passengers and the last ships built with three classes. They were known as the "Three Graces of the South Atlantic".

Their 19 day southbound voyages departed every three weeks, connecting London and Boulogne via Vigo, Lisbon and Las Palmas with Brazil, Uruguay and Argentina. The 21 day northbound trip was similar, but after the last passengers disembarked at Rotterdam the vessel deadheaded to London.

Their superstructures were split between two sections with one of the five cargo holds between them. The forward tower contained the bridge and officers' quarters, and the larger midship section contained accommodations for 464 passengers. 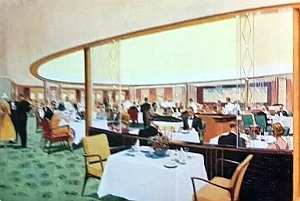 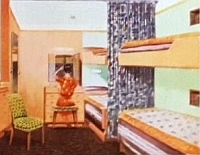 Cabin class was less fancy, but still spacious and featured some rooms with two lower beds. The Cabin class public rooms and pools for Cabin and Third class were on Promenade Deck B. Third class was very simple but clean occupying two, three and four-berth cabins, with a lounge and smoking room on Shelter Deck C. Separate dining rooms for each class were also on Deck C. 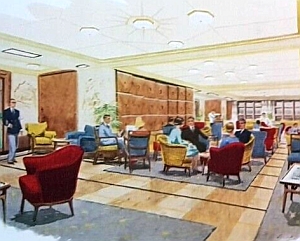 Many of the passengers, especially in First class, enjoyed the round-trip voyage as a seven week luxury cruise, and there was a British tourist trade on the short distance sunshine run to Spain, Portugal and the Canary Islands. Third class was largely filled by migrants traveling from Vigo and Lisbon to new lives in South America.

Cargo carrried by Amazon, Aragon and Arlanza included chilled beef loaded at Buenos Aires for shipment to Britain and various southbound manufactured products. But by the late 1960's, the beef trade had collapsed, and furthermore there were new, more efficient container ships coming into service and passengers increasingly opted to fly. 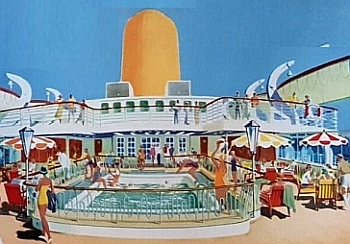 " ... Doctors will tell you that the stresses and strains of the modern age put a premium on 'time to relax'. You can rest, relax and recuperate in one of these new ships, sailing amid the blue and golden weather, and dipping through the tropics by the palm-green shores ... "

These fine ships lasted less than a decade with Royal Mail Lines before being transferred to the Shaw Savill Line and renamed appropriately for their London to New Zealand service via the Panama Canal. They were also the last passenger ships built for the 119-year old Royal Mail Lines.

Go to Royal Mail Lines sailing schedules or select schedules by ship below: