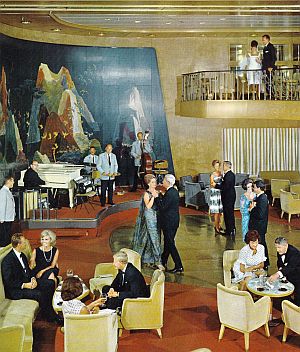 In another unusual decision, the two classes aboard Rotterdam were divided horizontally rather than vertically, facilitated by a unique midship double stairway with each class using one side separated from the other. Elevators would only stop at selected decks. First class public rooms were on the Bridge, Boat and Upper Promenade Decks, which included the distinctive "Ritz Carlton" and an indoor pool on D-Deck. Tourist class was on the Sun and Promenade Decks with an outdoor pool aft. Both dining rooms were on B-Deck.