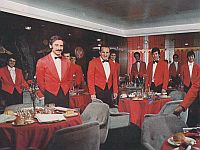 Federico C was built at the same renowned Genoa shipyard as the Italian Line ships of the 1950s with plans that were influenced by the stylish Andrea Doria and Cristoforo Colombo. The new Federico C entered service on the Italy to South America run in March 1958, but in 1966 she was reassigned to a new mid-Atlantic route from Italy to the West Indies and Florida from spring through fall, cruising from Port Everglades (Ft. Lauderdale) to the Caribbean in the winter.

With a stellar reputation, Costa Line ordered a larger ocean liner for the booming South America trade, the sleek and beautiful Eugenio C. Influenced by several other Italian liners, especially the similar Oceanic of 1965 produced by the same shipyard, the new Costa ship entered service in 1966. She was the fastest ocean liner on the South Atlantic, at least two days faster than the Italian Line competition. Her normal schedule was from Naples to Genoa & Cannes (1 day), Barcelona (2 days), Lisbon (3 days) then southwest across the Atlantic to Rio de Janeiro (10 days), Santos (11 days), Montevideo (12 days) and Buenos Aires (13 days). 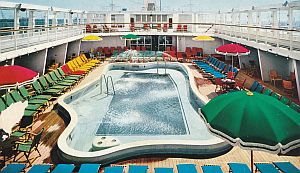 First class passengers aboard Eugenio C had a spacious pool area, gym and tavern midship up on the Lido Deck, while the Cabin class pool and veranda bar were on Sun Deck aft. Most of the public rooms were on the Lounge Deck, including the forward First class "Ambra" ballroom and "Rubino" bar lounge plus a card room and writing room. The midship Cabin class "Opale" lounge and separate bar, writing and card rooms followed. Aft was the Tourist class "Turchese" lounge and bar, veranda bar and swimming pool. Each class had its own dining room on Restaurant Deck.