One of Italy's great passenger shipping companies, Lloyd Triestino Societa di Navigazione built seven fine motor liners in the early 1950s for their long distance trades from Italy. It was the "Golden Age" of the combination liner, and they were among the most beautiful of the type ever built.

The first trio were named Australia, Neptunia and Oceania, which were assigned to the Australia service via Suez. However, the migrant trade soon outgrew their capacity, so in 1963 they were transferred to the Italian Line for service to South America. 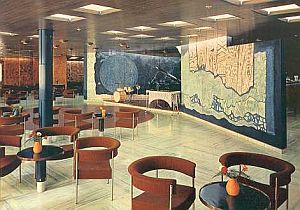 Lloyd Triestino placed orders for the much larger and faster Galileo Galilei and Guglielmo Marconi. They were spectacular, sleek and modern, built in the last great age of ocean liners that included the Leonardo da Vinci, Eugenio C and Home Lines' Oceanic. Consequently Galileo Galilei and Guglielmo Marconi were very popular, attracting passengers from across Europe as the finest ships on the Australia run. Each class had its own swimming pool and lido, ballroom, lounge, writing room, card room, dining room and enclosed promenade. 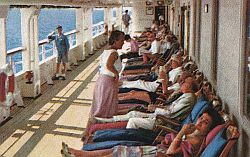 The second pair of combination liners, the Africa and Europa, were assigned to the vital route from Trieste and Venice down the eastern coast of Africa which included Italy's former colonies of Eritrea and Somalia as well as Kenya, Tanzania, Mozambique and South Africa.

The final pair were the Asia and Victoria for the exotic month long run to the Far East from Italy to Egypt, Yemen, Pakistan, India, Indonesia (most sailings), Singapore and Hong Kong.

All of the combination ships were of modern Italian design which included a curved superstructure, streamlined funnel and terraced afterdecks. Each class had its own pool and lido, main lounge, verandah, card room and writing room.

They earned an envied reputation for fine accommodations, good food and attentive service. Fully air-conditioned and with private or shared facilities in most or all cabins, the Africa, Europa, Asia and Victoria were perhaps overall the best equipped ocean liners on their routes.