In the aftermath of World War II, there was interest in reopening luxury German flag transatlantic service to New York. Several investors established the Hamburg-Atlantic Line in the mid-1950's and arranged to buy the flagship Canadian Pacific ocean liner Empress of Scotland (ex Empress of Japan) for US$2.8 million, which was being retired. Extensively rebuilt as the Hanseatic at a further cost of US$4 million, her three funnels were replaced by two of contemporary design, passenger capacity increased by over 500 berths and gross tonnage raised by about 4,000 tons. 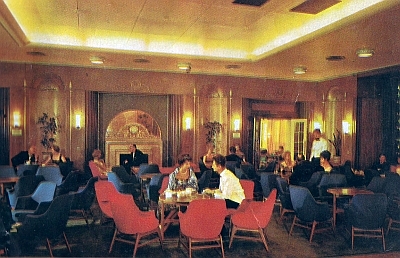 Hanseatic entered service in July 1958, and was assigned to a route from New York to Cherbourg, Southampton (7 days) and Cuxhaven (9 days), with a round-trip sailing approximately every three weeks from spring through fall. After the transatlantic season, the ocean liner cruised from New York to the Mediterranean via Port Everglades, reaching as far as Egypt and Israel, ending in Cuxhaven six weeks later. In January, Hanseatic returned to Florida for Caribbean cruising. 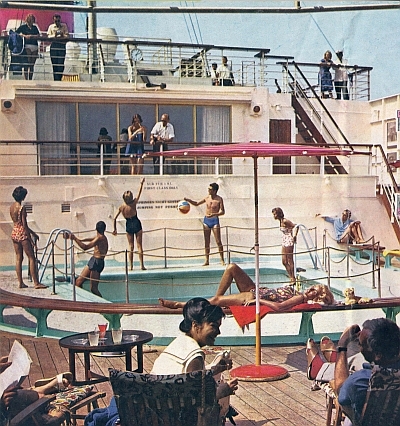 While on the Cuxhaven - New York service, Hanseatic operated as a two class ocean liner. First class occupied the entire Boat Deck including a lounge, restaurant, 36 staterooms and an outdoor pool. The other decks were devoted to Tourist class with public rooms including a lounge, cafe, theater, winter garden and tavern. Tourist class staterooms were on Upper, Main, Restaurant and A-Decks, all with private facilities and most convertible from sitting room by day to bedroom at night.

"Stars sparkle brightly over the wide expanse of ocean as you wish each other a fond good night aboard the happy Hanseatic, the great and beautiful floating city on which you can REST - RELAX and ENJOY LIFE AT ITS VERY BEST".

Hanseatic continued in service until an unfortunate fire while docked at Pier 84 in New York on September 7, 1966. She was towed to Hamburg, but found to be beyond economic repair. She was replaced in November, 1967 by the Zim Lines' Shalom, which was renamed Hanseatic.

Go to Hamburg-Atlantic Line sailing schedules or select schedules by ship below: