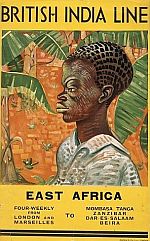 The British India Steam Navigation Company at one time operated one of the largest merchant fleets in the world, reflecting the far reach of the British Empire. Their ships connected Great Britain with India and the east coast of Africa. A further network of colonial routes radiated from India to the Middle East, Africa, Australia and the Far East.

The Kampala and Karanja were built with updated pre-war designs to connect Bombay with Pakistan, Kenya, Tanzania, Mozambique and South Africa. Every voyage also called at Mahe in the Seychelles, a vital link for that remote island group until an airport was completed in 1971. Originally both ships traveled the entire route, but in 1966 with loss of the South African mail contract and sharply reduced migrant traffic, Kampala was placed on a monthly round trip only as far as Dar Es Salaam.

Each of the twin ocean liners offered a covered open promenade wrapping around the public rooms. Forward were the First class music room and veranda cafe, followed by a cocktail lounge, card room and library. Second class public rooms were just aft, and the dining rooms were below. First and Second class shared blocks of interchangeable cabins, while Third class bunks were completely separate. Kampala and Karanja had no air-conditioning, but only forced-air ventilation, which was fine while the ships were underway, but could be stifling in port.

Entertainment was typical of the times, consisting of afternoon teas with violin music and perhaps dancing to an Indian band or a film or quiz in one of the public rooms. But what could be more enjoyable and relaxing than a day simply spent on deck reading and watching the sea go by?