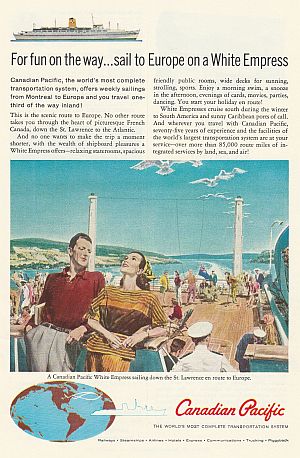 In recognition of the post-World War II demand for economical transportation of tourists and migrants, the Empress of England and Empress of Canada were designed with Tourist class occupying most of the space, which was a fundamental change of ship design. They were also of a higher standard to fill a dual role of cruising profitably in the winter when the St. Lawrence River was not navigable as well as crossing the Atlantic in warmer months. Both of the ocean liners were fully air-conditioned and stabilized.

Their normal route was from Montreal and Quebec City to Greenock and Liverpool. Canadian Pacific advertised a scenic 1,000 mile passage on calm, sheltered waters down the St. Lawrence River on the way to Europe. 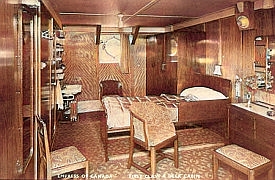 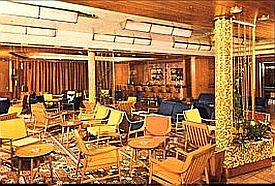 Empress of Canada was a slightly larger, improved running mate. First class had the "Mayfair" Room, "St. Lawrence Club" and "Salle Frontenac" Restaurant. First class cabins and suites aboard Empress of Canada were forward on Empress Deck and midship on Upper Deck. Tourist class had the "Windsor" lounge, "Banff Club" and "Carleton" Restaurant. The two-deck "Canada Room", a cinema and indoor swimming pool were shared by both classes. 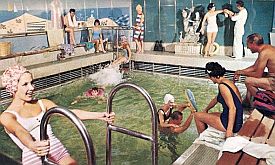 Declining demand moved Canadian Pacific to withdraw Empress of England in 1970 and sell her to the Shaw Savill Line as a replacement for their Southern Cross. Empress of Canada only remained in service until November, 1971. By January she had been sold to the new Carnival Cruise Lines as Mardi Gras, their first cruise ship.