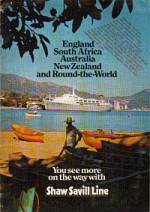 The Shaw Savill & Albion Company built two quite advanced one class ocean liners for continuous around-the-world service. Voyages were approximately 75 days, from Southampton to Australia and New Zealand outward via South Africa and return via Panama or in reverse order.

Southern Cross was a remarkable ship for her time, with significant innovative features. She was the first major liner with funnel and engines aft, which created substantial midship passenger space, the first passenger ship that carried no cargo (except stores) and the first major modern liner with all tourist class accommodations.

The slightly larger Northern Star followed a few years later, though with less attractive interior finishing of formica and linoleum and suffering somewhat from mechanical troubles. She sailed eastbound while her fleet mate sailed westbound, with each ship completing four voyages per year.

Both the Southern Cross and Northern Star had similar accommodation layouts. There were a large open Sports deck and Sun deck with outdoor pool. The Lounge Deck offered a forward lounge, writing room, library, smoking room, two-deck cinema lounge and a tavern. There were forward and aft restaurants and a proper wrap around Promenade Deck.

"Perhaps you just want to sail on and on, with fresh horizons each dawn and a new port to look forward to. Shaw Savill Round-the-World voyages are for you."

Go to Shaw Savill Line sailing schedules or select schedules by ship below: